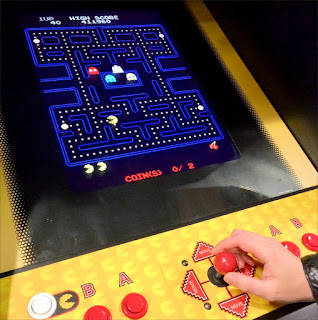 The Golden Age of Arcade games is in full swing by May 1980, and it sees the launch of a gaming icon – Pac-Man. Developed in Japan by Namco, it followed on from their successful Galaxian shoot-‘em-up, but Pac-Man was a completely different type of game.

As with Galaxian, Pac-Man was powered by a Z80 processor, it had colour graphics with sprites and a dedicated graphics co-processor and a three-channel sound chip. Utilising and impressive array of technology from the era, the capable hardware platform allowed for a much richer gaming experience than earlier generations.

The game itself – first called Pakkuman and then Puck Man before becoming Pac-Man - is familiar to most, but in case it somehow passed you by, the player controls the Pac-Man (essentially a circle with a chomping mouse) who is chased around a maze by four ghosts (Blinky, Pinky, Inky and Clyde). Pac-Man’s job is to eat all the dots in the maze, if caught by a ghost he loses a life… but various power pills around the maze allow Pac-Man to eat the ghosts instead. The ghosts have different personalities and between them try to chase and trap Pac-Man.

With appealing graphics and sound, Pac-Man was a fun game to play – and it was also something different from the alien invasion or war games that dominated arcades. A slow burn at first, when Pac-Man hit the US in late 1980 it became a smash hit and the most popular game around, shipping 100,000 cabinets by 1981. 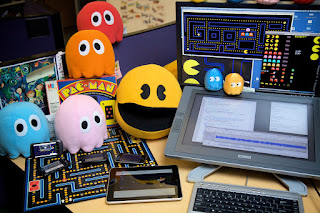 After arcade success came conversions to home computers and consoles, official and unofficial and of varying quality, and then there were endless sequels (notably Midway’s Ms. Pac Man), board games, TV shows, toys and other things you could spend your cash on. The franchise raked in billions of dollars and created an iconic character recognised throughout the world. Although there are many different ways to play Pac-Man today, if you want an original cabinet in good condition then you can expect to pay several thousand pounds.

Email ThisBlogThis!Share to TwitterShare to FacebookShare to Pinterest
Labels: 1980, Arcade Games, May