A brief history lesson – back in May 2005 Nokia announced their Linux-based 770 Internet Tablet, running an operating system called Maemo. This had most of the ingredients of the modern smartphone apart from the actual phone, and it went through several revisions such as the N800 and N810 before being turned into a pretty capable smartphone in 2009 with the N900. But then a disastrous attempt to merge Maemo with Intel’s Moblin OS to create a new OS called MeeGo caused the project to stall and at a key part of the smartphone wars, Nokia found itself without a competitive product. The follow-up to the N900, the Nokia N9 was launched 2 years afterwards, but by this time Nokia had already given up on MeeGo and had decided to base future smartphones on Windows.

The N9 caused quite a stir, but Nokia deliberately restricted its launch to smaller markets, presumably to meet a contractual obligation rather than just cancelling it. The N9 was the phone that Nokia didn’t want you to buy, and yet people did and they found that this latest incarnation of the Maemo / MeeGo operating system was rather elegant and had potential.

Nokia’s cancellation of the N9 was a death-knell for MeeGo, and that operating system was eventually merged with another Linux-based OS called LiMo to become Tizen which eventually found a niche as an embedded systems OS, especially with Samsung.

To some, the effectively cancellation of MeeGo seemed to be a squandering of something valuable. So, a group of engineering (most former Nokia employees) created a company called Jolla to develop the MeeGo-derived Sailfish OS. And in May 2013 they announced the Jolla smartphone (just called "Jolla" and pronounced "Yo-La")).

The Jolla shared a similar design philosophy to the N9, with simple and clean lines and a brightly coloured back. The operating system was as powerful as anything else on the market, but with a swipe-based user interface that made it stand out from Android and iOS offerings. The Jolla smartphone appealed to Nokia and Linux fans in particular, and it ended up being a niche success.

An attempt to launch a Jolla Tablet nearly ended in disaster when the company couldn’t bring it to market in time and had to offer refunds to customers who had crowdfunded it. However the company persisted and the Sailfish OS continues to be ported to other devices, and is still around 5 years later.

Jolla and Sailfish haven’t quite had the breakthrough success that they need, however the Sailfish OS is finding its way into devices for emerging markets and more specialist applications such as the highly secure Turing Phone. It seems that seven years after Nokia abandoned this particular platform, it is still going strong.

Email ThisBlogThis!Share to TwitterShare to FacebookShare to Pinterest
Labels: 2013, Maemo, May, MeeGo, Moblin

File this one under “W” for “Weird”. The LG HB620T was a strange-looking clamshell phone that attempted to deliver something that customers didn’t really want, and ended up being horribly compromised along the way.

There was a good idea behind the HB620T – and that idea was that people wanted to watch TV on the move. Ten years ago there was no 4G, 3G services was spotty and public WiFi wasn’t great either. But more critically, mobile data was extremely expensive in 2008 Vodafone charged £7.50 a month for about 4Mb of data per day, with each 15Mb after that costing another £1. High-quality mobile video would have been too expensive to watch for very long.

The solution seemed to be to put a digital TV receiver in the phone itself. Early attempts, such as the Nokia N92, used a version of the common DVB system optimised for handhelds with the name DVB-H. The problem was that nobody really wanted to pay for the infrastructure to support DVB-H, so manufacturers instead tried to adapt phones for the more common household DVB-T. This meant that no additional broadcasting infrastructure was needed, but it wasn’t as easy to make it work in mobile handsets.

LG’s approach was to build a DVB-T receiver into a clamshell phone. Nokia had already done this years earlier with the N92, which was quite a chunky device – but it did feature a clever two-way hinge which allowed the 2.8” screen to be used in landscape orientation. But the LG HB620T didn’t do it that way: LG just made the clamshell wider than normal and squeezed in a quite small 2.0” display in landscape mode instead.

The phone needed to use a large antenna to receive the TV signal, and the receiver wasn’t compatible with the digital TV service in many countries either. You might not be surprised to find out that the combination of odd design and poor features – plus the small screen – meant that the HB620T was not a success.

The LG HB620T always was pretty rare, and if you can find one the prices tend to be €120 or more. As a device it service very little practical purpose, and you can actually get a 9” DVB TV for less than that. And of course these days you can just stream most things to an app instead..

Email ThisBlogThis!Share to TwitterShare to FacebookShare to Pinterest
Labels: 2008, LG, May, W-for-Weird

You might say that the modern smartphone revolution started in January 2007 with the launch of the original iPhone, which is probably true. But it isn’t the case that everything before the iPhone was some sort of clunker, and everything afterwards was some sort of clone. The BlackBerry Bold 9000 – launched in May 2008 – not only ignored the iPhone completely, but it was also a significant sales success.

The BlackBerry Bold 9000 is perhaps the archetypical BlackBerry messaging device. An evolution of what creators RIM had been doing for years, the Bold retained the classic BlackBerry physical keyboard, excellent messaging capabilities and brilliant display characteristics of its predecessors. But now it was easier to use with a little trackball, and it packed in 3.5G data, WiFi and GPS (easily outclassing the iPhone) plus expandable memory and good music playback cababilities in a lightweight unit that could happily work for days on a single charge.

Messaging was the killer app that set the BlackBerry range apart from everything else. Offering quick and easy-to-use email messaging for both corporate customers and individuals, the Bold 9000 expertly delivered the internet feature that everyone at the time cared about.

Apps were so-so, but the original iPhone didn’t even have downloadable apps. Web browsing was pretty unpleasant too, but in 2008 there were hardly any sites optimised for mobile browsing. The Bold did everything that consumers thought they wanted, and as result it sold in large numbers, creating significant sales growth for RIM.

The problem was that what consumers wanted was changing. The original iPhone was limited in what it could do, and was slow. But only a one month after the Bold 9000 was launched, Apple came up with the much improved iPhone 3G. The world’s first Android smartphone – the T-Mobile G1 – was launched a few months later. The sand was shifting under RIM’s feet, and it was quickly becoming clear that RIM was not shifting with them.

A second-hand BlackBerry Bold 9000 is probably not anyone’s idea of a good time, so it might not surprise you to find out that second-hand units are dirt cheap. It’s certainly a device that was critical to the growth of RIM, but perhaps history has overlooked this useful little messaging smartphone.

Email ThisBlogThis!Share to TwitterShare to FacebookShare to Pinterest
Labels: 2008, BlackBerry, May 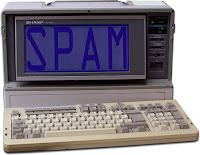 No, not SPAM but spam. Junk email. That sort of thing. You've probably seen it. You might even know that the name comes from a Monty Python sketch. But you might not know that the first spam message is commonly believed to have been sent forty years ago this month. And here it is:

WE INVITE YOU TO COME SEE THE 2020 AND HEAR ABOUT THE DECSYSTEM-20 FAMILY
AT THE TWO PRODUCT PRESENTATIONS WE WILL BE GIVING IN CALIFORNIA THIS
MONTH.  THE LOCATIONS WILL BE:

A 2020 WILL BE THERE FOR YOU TO VIEW. ALSO TERMINALS ON-LINE TO OTHER
DECSYSTEM-20 SYSTEMS THROUGH THE ARPANET. IF YOU ARE UNABLE TO ATTEND,
PLEASE FEEL FREE TO CONTACT THE NEAREST DEC OFFICE
FOR MORE INFORMATION ABOUT THE EXCITING DECSYSTEM-20 FAMILY.

Responses to the spam email were strongly negative. Luckily the controls introduced in 1978 killed off spam once and for all. Oh no. Wait...
at 21:50 No comments: