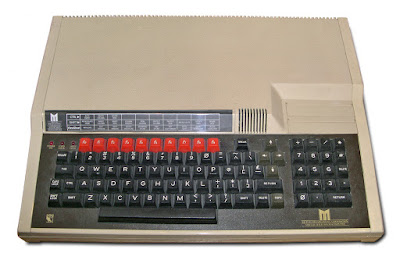 Thirty years ago we were seeing a great shift from away from the first generation of 8-bit home computers to 16 and 32-bit platforms such as the Atari ST and Commodore Amiga. But 8-bit computing wasn't dead yet, and low cost devices such as the Amstrad CPC 6128 and PCW along with the Sinclair ZX Spectrum 128 showed that there was still life in these simple devices yet. The Acorn BBC Master belonged firmly in the second camp, an improvement over the original BBC Micro launched five years earlier. There were various models of Master available, but the most common one was the Master 128.

Although the original BBC Micro was a popular and technically capable device, one key problem it had was the lack of memory. The 6502 processor at its core could only directly address 64KB of memory, 32KB of which was used by the ROM and up to 20KB was used by graphics.. and a about half of the meagre amount left was allocated to the system. The BBC Master 128 got round this problem by allowing memory to be addressed in banks which could be paged in and out when needed.

The Master added two cartridge slots and a slightly upgraded processor, and crucially video memory was now separate from main memory. As ever, the array of expansion ports was impressive - there was a floppy disk interface, optional network interface, A-D convertor port, serial and parallel port, plus expansion ports and most interesting of all a "Tube" interface for a second processor.

The Tube allowed for a second 6502 processor, or a Zilog Z80 allowing CP/M capabilities or even a National Semiconductor 32016 which could run a variant of Unix. When running with a Tube coprocessor, the Master simply handled the input and output which allowed the Master to run theoretically anything that could be squeezed into one of the beige expansion boxes. 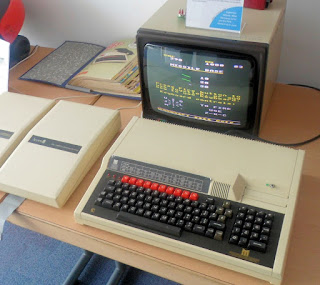 There were other versions of the Master too, notable the Master Compact with a difference case design and integrated 3.5" disk, the Master AIV (used in the BBC Domesday Project) and the Master 512 with an Intel 80186 CPU and 512KB of RAM. In one form or another, the Master was around until 1994 when it was finally discontinued. It proved quite popular, primarily in the UK education market.

Although it had some interesting features, it was hardly a groundbreaking machine. As it turns out, Acorn were developing something that would change the world - the ARM-based Acorn Archimedes that was launched the next year. But more about that another day. These days the price a BBC Master ranged between around £50 to over £200 depending on condition and peripherals. 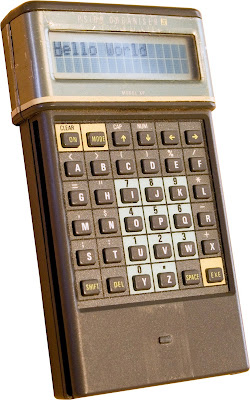 Launched thirty years ago, the Psion Organiser II is arguably the world's first commercially successful PDA. Combining a usable set of applications with an expandable software and hardware platform, the Organiser II shifted half a million units in its lifetime and introduced the power of handheld computing to both companies and individuals alike.

By modern standards the Organiser II has a familiar feel to it, with a footprint similar to a large smartphone such as an iPhone 6, although about 50% heavier and more than three times thicker. The front of the Organiser was almost entirely taken up with a keyboard (with the keys arranged alphabetically) with a small two-line LCD on the top. Inside was a Hitachi CPU clocked at a little under 1MHz and power was provided by a tradition 9 volt PP9 battery which could run the Organiser II for months.

There were a variety of data storage options, from simple RAM modules that would lose data when the battery was removed to "write once" programmable ROM packs (which had to be erased with ultraviolet light) and later EEPROM packs. Hardware expansion included a serial module which allowed you to transfer data to another computer system. It didn't take long for corporations to adapt the Organiser II to allow them to collect data "in the field" which could then be uploaded to corporate mainframes.

You could program your own applications, or you could use the inbuilt diary and calculator to organise yourself. Third-party applications became available, and there was even a rudimentary word processor.

As you might guess, this wasn't the first Psion Organiser, but it was a huge improvement over the original launched two years earlier. And although Casio and Sharp had been making pocket computers for some time, the Organiser II is acknowledged by many as being the first usable personal digital organiser.

The Psion Organiser II was followed by more powerful PDAs running the EPOC operating system, which eventually evolved into Symbian. Because of the large number sold and the almost legendary reliability of these devices, there are plenty of Organiser IIs on the market today, with prices ranging from a few pounds to just shy of £100 depending on condition and features. And unlike a lot of vintage devices, the Organiser II is something that you can still use today to keep yourself.. organised.

Picture yourself a decade ago. The iPhone and Android platforms haven't been invented yet, clamshell phones are still popular and one of the main contenders in the smartphones wars is Windows Mobile. So perhaps you can understand why HTC decided to try to squeeze Windows into a standard flip-phone design.

The HTC STRTrk had a clumsy name, it was originally called the Star Trek before the presumed involvement of lawyers. At this point HTC didn't sell handsets under their own name and the most common moniker for this was the Qtek 8500.

You were expected to muddle through Windows on the tiny 2.2" QVGA display, using only the navigation keys and it wasn't touch-capable. The STRTrk was a strictly GSM-only affair with no 3G or WiFi, internally it had a 200 MHz CPU with 64MB of RAM, 64MB of storage plus a microSD slot. On the outside was a 1.3 megapixel camera, and the whole thing weighed just 99 grams.

It was woefully under-specified for a smartphone, and too fiddly to use as a feature phone. Perhaps it isn't surprising that it didn't really sell way, and consequently is it extremely rare today with estimated prices for used models being around €35 or so.
at 18:38 No comments:

Email ThisBlogThis!Share to TwitterShare to FacebookShare to Pinterest
Labels: 2006, HTC, May, Windows

By mid-2011, sales of BlackBerry devices were at their peak. Despite competition from the iPhone and Android handsets, this classic messaging device was still hugely popular. And out of all class BlackBerry handsets, the Bold 9900 probably represents "Peak BlackBerry".

Designed very much in the theme of the messaging devices that pushed BlackBerry to popularity in the noughties, the BlackBerry Bold 9900 (aka the Bold Touch) had the familiar little QWERTY keyboard, a trackpad and a small but high-resolution 2.8" touchscreen display. On the back was a 5 megapixel snapper, and the Bold 9900 supported HSPA+ and WiFi connectivity.

If you were a fan of the BlackBerry 7 and earlier operating systems, then this was definitely the device to have. But the question arose.. who WAS a fan of the BlackBerry OS? Google's Android and Apple's iOS were more powerful and more elegantly designed, and no matter how often BlackBerry tried to tweak this devices it was like putting lipstick on a pig. Or perhaps polishing a turd.

This isn't to say that it was a bad device. If messaging was your thing, then this was very hard to beat. But web browsing was horrendous, apps were awful and the whole thing looked like a relic of a previous era. Which it was.

It wasn't long until sales began to slide, and although BlackBerry made a few lower-cost "classic" devices following on from this, they were instead concentrating on an ill-fated attempt to move their devices to a completely new platform based on QNX. And that effort really made sales drop off a cliff. Recently, BlackBerry have started producing Android handsets with support for BlackBerry services built-in.

Despite all the gloom, the 9900 still has its fans and prices for a good refurbished one can be €100 or more. It isn't really very practical as a modern smartphone though, although there are still many people who love their classic BlackBerry smartphones and don't want to give them up.
at 22:51 No comments:

Email ThisBlogThis!Share to TwitterShare to FacebookShare to Pinterest
Labels: 2011, BlackBerry, May

The Universal Serial Bus (USB) hit the market twenty years ago this month. Designed to provide a standard interface for almost every kind of peripheral, this now-ubiquitous feature actually got off to a rocky start.

Twenty years ago, a well-specified PC would have a huge variety of ports. There would be one or two serial ports, typically using a 9-way D-type connector that could be used for mice, modems or some types of printer. A bigger 25-way D-type would act as a parallel printer port, there might be a 15-way D-type for a joystick, one or two PS/2 interfaces for a keyboard and mouse, some system might also feature a SCSI port for attaching an external hard disk, and also some 3.5mm jack plugs for audio input and output. All of those ports could be replaced by USB ports, about the only other ports you would need would be a video port and a network connection.

USB 1.0 hit the market in May 1996, but it was very slow and rather buggy. Operating system support was very sparse with Windows 95 only offering rudimentary support in August 1997 with much better support in Windows 98 in June 1998. The original iMac was the first Apple device to offer USB support in August 1998, which coincided with the release of the much-improved USB 1.1 at the same time. 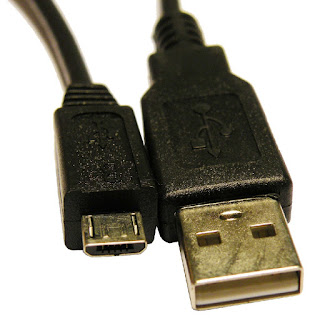 In 2000 USB 2.0 was launched with data transfer rates of up to 480Mbps. This made it possible to use USB devices as disk drives and ushered in the era of the thumb drive. Subsequent speed increased with USB 3.0 and 3.1 followed in 2008 and 2013 but didn't really make much of a market impact.

It wasn't really until the mid-2000s that legacy ports started to vanish completely from PCs, but finally it did become the de-facto standard for most type of computer peripheral. In 2014 the USB-C standard was launched, which finally added reversible connectors which promised to eliminate the 20-year bugbear of connectors that never seemed to quite fit.