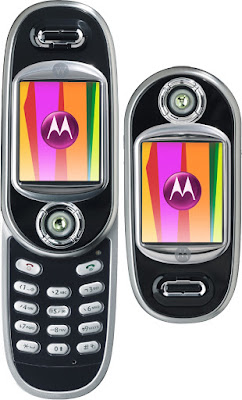 In these days of big slabby smartphones, it’s easy to forget that in the dim and distant past there was a bit more choice. There were monoblock “candy bar” phones, clamshells, sliders and even tacos and bricks.

On top of that, there was one other quite rare form factor - the rotator. Motorola were the king of this particular idea, and somewhere between the V70 of 2002 and the AURA of 2008 was the curious Motorola V80.

You could say that the V80 summed up Motorola in one handset. A combination of clever design, exquisite engineering, poor attention to detail and terrible software made the V80 both brilliant and infuriating at the same time.

To modern eyes, the V80 looks rather like the phones we have today, with the display dominating the front with a few buttons added in. But there was a trick – with a quick move of the fingers, the numeric keypad would swing out from underneath and rotate out. This was probably the most carefully engineered part of the V80, and was certainly its coolest feature.

There were some other cool features – the V80 could be pretty good at games as it was easy to use in landscape mode with a little joystick for control. Incoming phone calls would trigger a pretty epic display of lights, which you could customise according to caller. The 176 x 220 pixel display was sharper than most, and overall the physical design looked very different from anything else on the market. 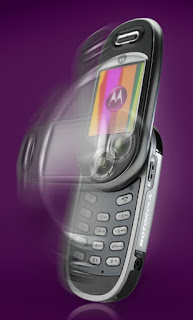 There were some catches though, not least that the phone was nearly an inch thick. Given the phone’s pretty decent media and gaming features, there was no expandable memory so you had to make do with what was on board. The keypad itself felt cheap and the little green joystick had a habit of coming off. And because this was a Motorola from the early noughties, the software was pretty horrible too.

Despite its flaws, the V80 attracted a loyal fan base who often held onto their phones far longer than would seem reasonable. The rotator format itself remained pretty rare, but the Nokia 7370, Sony Ericsson S700 and Samsung X830 all attempted to do something similar. Today you can pick up a V80 for around £25 to £80 depending on condition.

Image credits: Motorola
at 19:55 No comments:

Back in the early noughties, Sharp was competing in the European market pretty successfully with a series of highly-regarded phones that offered features that were often far ahead of the competition.

February 2004 saw the announcement of the Sharp GX30 – the first phone in Europe to have a megapixel-class camera, complete with an LED flash. In addition to this, the GX30 had a best-in-class 2.2” 240 x 320 pixel display using a CGS (Continuous Grain Silicon) LCD display which give an exceptionally clear and – and forgive the intentional pun – sharp image.

The rest of the phone was pretty good too – the GX30 had expandable memory via a full-sized SD card, an MP3 player, Bluetooth and all of this was wrapped up in a very pretty silver clamshell design (although peculiarly it still had an external antenna).

In most European markets, Sharp handsets were exclusive to Vodafone who had access to all sorts of interesting Japanese devices through their ownership of one of the major Japanese mobile networks. Although some handsets did make it to other carriers – notably the Sharp TM200 – you were pretty much limited to Vodafone if you wanted one.

Perhaps it was this carrier exclusive agreement that stopped Sharp from having the breakthrough they needed, and despite some very good devices they faded out from the European market within a few years.

Perhaps not an obvious phone to collect, but the GX30 is pretty commonly available from about £5 to £40 depending on condition.

Ten years ago, phone manufacturers were experimenting with more environmentally-friendly designs. While much of this revolved around packaging and recycled plastics, there was also a move to look at adding solar panels to phones so that they could be charged from the sun.

You might at this point realise that modern phones don’t have solar panels, and that this concept was not successful. And you would be right, but it’s an interesting side-note in the history of phone design.

The Samsung Blue Earth was first announced at MWC in February 2009 along with some solar devices from other manufacturers. The Blue Earth was one of the stars of the show though, with a touchscreen display and an attractive design to go with it. But it wasn’t until October that they actually revealed the specifications of the phone which started shipping the same month.

Despite the touchscreen, this was a feature phone rather than a smartphone. It came with a number of “eco-friendly” apps such as a pedometer which worked out how much CO2 you were saving by walking. The specs overall were competitive for the time and the overall response was pretty positive.

So why didn’t it catch on? At about €300 the device was fairly expensive, and then there was the panel itself. Yes, it certainly charged the phone but only relatively slowly. Even by Samsung’s own figures, you’d have to leave your expensive device sitting around in sunlight for an hour to get ten minute’s talktime.

The fundamental problem was the size of the panel that could fit on the phone – to be really useful, it would need to be much bigger than the phone itself. And of course there was no need for TARDIS-like trickery, you could simply attach a bigger panel by plugging one in. Even 10 years ago, you could get a decently-sized solar panel with USB outputs for £50 or so.

Today battery life is probably even more of a problem than ten years ago, but there’s an even simpler solution than wandering around the place with solar panels sticking out of you and that’s to carry a power bank with a large battery. And if you have solar panels on your house, you can even charge it with renewable energy too. Although it you really want one, you can currently buy a solar-powered iPhone of questionable taste.

We are going back fifteen years this month, a journey to the pre-iPhone era where smartphones were bigger, chunkier and altogether odder looking.

Nokia in particular had been pushing their own vision of what a smartphone should be with the Communicator series since 1996. These high-end devices looked like a normal albeit large mobile phone on the outside, but opened up to reveal a large screen and keyboard on the inside. In February 2004 they announced the Nokia 9500 Communicator.


The display on the Communicators was like nothing else on the market, on the 9500 it was a 4.5” 640 x 200 pixel panel which was pretty good for rendering web pages, composing emails or writing documents. The keyboard was a little more cramped than the one in the previous 9210i, but it was still very usable. The 9500 was also the first in the range to have a camera, although it was only a pretty basic one.

One major omission was the lack of 3G support – it wasn’t as it they couldn’t fit the components into this massive brick of a phone, they just chose not to. The 9500 did have WiFi though, so get it near a wireless hotspot and it could do a decent job of coping with a web that was still designed for desktop PCs.

Nokia’s Series 80 platform was more capable than the Series 60 found in their other smartphones, and on top of that the 9500 had expandable memory, fax capabilities, a wordprocessor, spreadsheet and presentation application and if anyone tried to steal it you could bash them over the head with it.

It was a reasonably successful device in the days when smartphones were still pretty rare, and over the years the Communicator range acquired a dedicated and rather patient fan base. All Communicator models are highly collectable today.

Rivals Motorola were also eyeing up the QWERTY-equipped smartphone market, but they had a completely different approach. The Motorola MPx300 (later rename--d to just “MPx”) was a Windows clamshell smartphone with stylus-driven touchscreen inside. Unlike the large display in the Nokia, the MPx had a rather more modest 2.8” 240 x 320 pixel unit… this was still pretty good for 2004 though.


The stand-out feature with the MPx was the remarkable two-way hinge that meant you could open it up like a standard clamshell or the mini-laptop format of the 9500. In order to support this, the MPx had a really strange keyboard that was QWERTY in one direction and numeric in the other. Although on one level this was a stroke of design genius, it also badly compromised the usability.

In fact, the MPx was slow and had limited memory and there were hardware reliability problems too. Despite being announced in 2004, the MPx only got a limited release in Asia about a year later and by the spring of 2005 the worldwide launch was cancelled.

In the end, neither phone set the pattern for future smartphones which these days are unencumbered by a physical keyboard. For collectors, the Motorola MPx is quite a rare find but surprisingly inexpensive at around £50 or so. The much more common Nokia 9500 is conversely more expensive, with unlocked ones in good condition being around £150 or so.