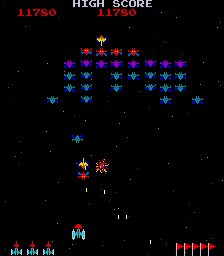 Galaxian was launched at a time when arcade games were becoming really popular – and profitable. Following the trail laid by 1978’s Space Invaders was Namco’s Galaxian. Despite there only being about a year and a half between these two products, Galaxian was a huge improvement.

Fundamentally the concept of the game was pretty similar to Space Invaders – the player controlled a spaceship at the bottom of the screen which could move left or right and fire. Arranged in neat rows at the top were hostile aliens that the player had to wipe out. But Galaxian was a much richer gaming experience.

The most obvious improvement that this game was in colour, unlike the monochrome Space Invaders that used plastic strips to give the *illusion* of colour. And instead of the aliens slowly shuffling their way across and down the screen, the enemies in Galaxian swooped down shooting, either singly or in a group. Combine that with simple but well-polished sound effects and it all added up to a game that made Space Invaders look primitive. 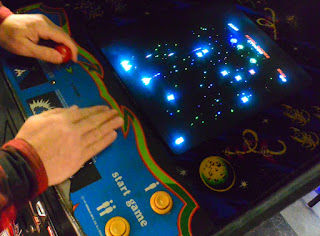 Inside was a Zilog Z80 processor which really was next-generation stuff compared to the old Intel 8080 in Space Invaders, plus of course electronics components were improving all the time which helped enormously. It wasn’t just hardware though, Galaxian was also efficiently coded to squeeze as much out of the hardware as it could.

Namco found that it had a huge hit on its hands, first in Japan and then in North America after partnering with Midway (who had previously partnered with Taito on Space Invaders). Galaxian went on to be one of the definitive arcade games of the early 1980s and it was eventually ported to many other platforms. The official follow-on – Galaga – was an even bigger hit, and Namco themselves continue on to this day having merged with Bandai in 2006 to create Bandai Namco.