Fifteen years ago, if you wanted a smartphone your choice was either Windows or Symbian. And if you wanted the latter, then the best smartphones were probably made by Sony Ericsson.

The Sony Ericsson P910 was the third generation of the P-series of Symbian touchscreen devices. Running the UIQ platform, these smartphones came with a touchscreen while it was still quite rare. Back in those days, Nokia was still very much in non-touchscreen territory.

The 2.9” 208 x 320 pixel screen was not the only notable feature of the P910 – the other was the unique flip-out keypad which had a tiny QWERTY keyboard on one side and a standard number pad on the other. When closed, the pad covered part of the screen and the P910’s software would adapt to the screen size as needed. In addition to the keys, the P910 could be used with a stylus or finger and there was a jog control too.

Connectivity was a bit limited, with GPRS data only – so no 3G, WiFi or even EDGE. Internal memory was expandable with Sony’s Memory Stuck Duo Pro cards. There was a basic camera on the back. The main feature was the operating environment which included a web browser, support for various email clients plus of course any compatible applications that you wanted to download onto the phone.

The P910 was moderately successful, but back then smartphones were still a niche market so it was pretty rare to see one. However, it helped to create a template for the smartphone revolution that happened a few years later.

Sony Ericsson did produce a number of other UIQ phones after the P910, but ultimately it was a dead end. Today you can pick up a decent network-locked P910 for around £35 or so, but unlocked examples and ones with accessories can cost much more.

The Samsung S9110 looks like a smartwatch, but instead it came several years before what we’d think of as a modern smartwatch, and it instead a complete feature phone shrunk down to the size of a wearable.

The most obvious feature of the phone itself was a 1.76” 176 x220 pixel touchscreen mounted on the front, the S9110 also supported Bluetooth, had an MP3 player and voice recognition and even a web browser. Internal memory was just 40MB and wasn’t expandable, and the S9110 took an old-fashioned mini-SIM car which must have taken up a fair amount of its internal space. A 630 mAh battery was quoted as giving 300 hours of use and the whole thing weighed 91 grams.

It was all very clever and this sophisticated gadget was a bit like something out of a James Bond movie. But it was also pretty useless… and it didn’t really need to be a phone at all, it might well have been better as a Bluetooth add-on to a more normal phone instead. As you might have guessed, the S9110 wasn’t a big seller and neither were the rival devices launched at the same time.

Ultimately the watch phone was a failure, and the modern smartwatch has fared little better.
It did have its fans though, and in those pre-smartwatch days it was one of the best ways of fulfilling that particular gadget need, with second hand ones selling for hundreds of pounds. Today you’d be lucky to find one at any price.

These days the computer you possibly interact with most often is your smartphone, and that is most likely to be an Android or iOS device. Both those operating systems are related, descended from the Unix operating system developed during the early 1970s.

Unix-like operating systems are not just found on smartphones – they are everywhere from web servers and huge mainframes to embedded devices and smart TVs. Over the decades it has been around, the influence of Unix is almost universal with only Microsoft’s Windows operating system offering any competition at all.

But what came before Unix? Just as your ARM-powered smartphone is spiritually descended from the 8-bit BBC Micro, Unix itself was borne out of another project: Multics.

Originally a project between General Electric (GE), Bell Labs and MIT. GE sold its computing business early on to Honeywell and Bell Labs dropped out. After five years of development, Honeywell released the first version of Multics to general users running on Honeywell 6000 series mainframes – with the Multics versions later named the DPS-8.

Multics was arguably the world’s first modern operating system, a highly-secure multi-tasking and multi-processor system it was also fault tolerant and the hardware could be reconfigured while the system was still in use. Multics also introduces the now-standard hierarchical file system, supported the concept of “daemons” (system processes that carry out tasks, in Windows these are called “services”). Multics also allowed every part of the system to be accessed as if it were a file, and introduced the concept of dynamic linking – Windows users would recognised these as being the ubiquitous DLLs we see today.

So where does Unix fall into all this? Two engineers working for Bell Labs in the early days were Ken Thompson and Dennis Ritchie who didn’t like the over-sophistication of Multics but did like some of the features – notably the file system and command line. Instead of making a computer system that could run on expensive multiprocessor mainframes, they designed something that would run on cheaper single processor minicomputers. They called it Unix, a play on the word Multics… Unix was for uniprocessor computers, Multics for multiprocessor ones.

In some ways Unix was similar to Multics, but in most fundamental ways it was completely different, because Kernighan and Ritchie could see where the design decisions of Multics were leading it to be an expensive niche product. At its heart, Unix is the antithesis of Multics.

Unix grew and evolved from its roots on the DEC PDP-7 to run on a huge variety of hardware. The match the choice in hardware, a wide variety of different versions of Unix were created. Somewhere along the way the Unix-like Linux and Mach operating systems were created which in turn spawned Android and iOS. Unix wouldn’t have been Unix without the influence of Multics.

Multics itself continues in development until the mid-1980s. Not long after that, Honeywell sold its computer business off to Groupe Bull. Despite all this, Multics hung around with the last system being shut down in October 2000. 31 years of history isn’t bad for something that wasn’t really considered a success.

Today, Multics memorabilia is pretty rare and it’s unlikely anyone has a complete system in their attic. However, the OS was open sourced some years ago and as a result there are some simulators available for you to try. If you are interested in learning more about this historic operating system, the Multicians.org website is utterly comprehensive and details just about everything you would ever want to know. 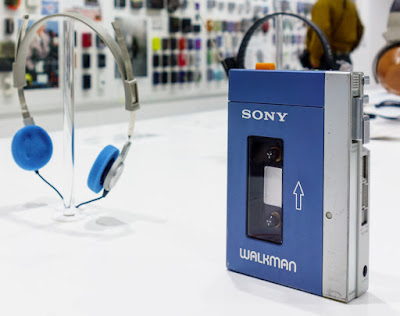 These days music is something that we enjoy on the go. We take for granted the ability to listen to music wherever we are, and to listen to whatever we’re in the mood for. On the train, on foot, in the car, in bed… listening to music is often a very personal experience.

It wasn’t always this way of course, and if the old days a typical way of listening to music would be an LP record on a record player. Which was fine, at least some of the time, but you could only listen to pre-recorded records in the vicinity of the record player itself. And although portable record players did exist, they were more luggable than convenient.

The invention of the Compact Cassette in the 1960s came up with a medium that was smaller and more durable than the LP, and crucially it was something that people could record onto themselves. Cassette technology improved through the 1970s which made it a popular medium for listening to music – and even for recording your own mix tapes – but cassette decks were still fixed in place and portable cassette player were still bulky and tended to be tinny.

The executives at Sony however recognised that the Compact Cassette had more potential, and it 1979 they launched the Sony Walkman TPS-L2, a portable cassette player powered by batteries which played back on stereo headphones.

Here was a device that you could attach to your belt or put in a bag… or squeeze into your pockets if they were big enough. And although cassettes may not have had the music quality that records had, the stereo headphones were a revelation to many users. Instead of listening to music, the Walkman put the music straight into your head.

It was an enormous success. Sales far exceeded expectations, and production of cassette-based Walkmans continued well into the 21st Century. Part of the appeal was down to the inherent “Japanese-ness” of the technology, but part was also down to opening up new ways of listening to music that weren’t available before.

Of course, eventually other ways of playing music became more popular. You can digitise thousands of songs and store them on your smartphone, or you can stream them with a service such as Spotify. You’d think that cassettes would be extinct, but in recent years they’ve enjoyed something of a renaissance, and a significant role for the original Walkman TPS-L2 in The Guardians of the Galaxy boosted the retro appeal further.

Today the Sony Walkman TPS-L2 is highly collectable with prices for units in good condition being in excess of £400. If you want something less iconic but a bit more high-tech, £20 or so can buy you a portable cassette player that can even convert your tapes to MP3.