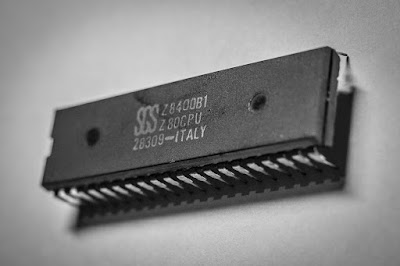 During the late 1970s and early 1980s the majority of home microcomputers ran on one of two processors: the MOS Technologies 6502 or the Zilog Z80 which was officially launched forty years ago this month.

It also found itself into embedded systems, calculators, musical instruments and communications systems. In some ways the versatility of the Z80 predated today's ARM cores, with Z80s popping up all over the place.


Forty years ago this month, Apple introduced their first product - the Apple I (also known as the Apple-1). Billed as a "fully assembled" system, in fact it was just a bare board to which the user had to add a power supply, case, keyboard, monitor and to be of any use a cassette interface was available too.


Based on the 6502 processor launched the previous year, the Apple I was a major step-up from the KIM-1 single board computer, although it was more than twice the price at $666.66 (around $2400 in today's prices). The KIM-1 was a primitive device compared to the Apple, which had 4KB of RAM as standard (expandable to 48KB), could output 40 x 24 characters on a composite video display, and when supplied with the cassette interface it could run BASIC.


Only around 200 units were ever produced, many of which were traded in for Apple II systems introduced in 1977. Maybe 60 or so Apple I machines still exist and examples can sell for hundreds of thousands of dollars. Each system was hand-built by Steve Wozniak in the garage of the parents of Steve Jobs.


The Apple I was on the market for a little over a year before it was replaced by the Apple II, the iconic 8-bit computer that sold around six million units. Technologically it wasn't much of a step up from the Apple I, but the II really was a fully assembled device that anyone could use rather than a hobbyist system. The Apple II continued in production for 15 years.


Although it sold in tiny numbers, the niche success certainly helped set up the Apple II and that is certainly a machine that transformed the early microcomputing scene. But if you want to see one.. go to a museum.

Once upon a time, there was a California company that produced a radically designed and rather beautiful device that transformed the way people dealt with technology. Over the years, this particular product gained a cult following that took on an almost religious fervour. You might be forgiven for thinking that this company was Apple, but it wasn’t. Instead this company was called Lear Siegler International (LSI), the year was 1976 and the product was the ADM-3A.

The ADM-3A was a dumb terminal, similar in concept to the DEC VT52 launched the previous year, and following on from the almost identical looking ADM-3 also from 1975. A simple device comprising pretty much of just a keyboard, screen and communications ports, it would plug into a contemporary computer which could range from a multi million dollar mainframe to a hobbyist microcomputer costing a few hundred dollars. The ADM-3A was much more usable than the ADM-3 though, supporting both upper and lowercase characters and having a cursor-addressable screen (like the VT52), both features the ADM-3 lacked.

Two things made the ADM-3A stand out. The first was the relatively low price of $1045.. which although equivalent to about a whopping $5500 today (much more than a top-of-the-range iMac) was actually a fair bit cheaper than the competition.

But perhaps the main thing that made it stand out was the design. Most terminals of the time were boxy affairs, but the ADM-3A curved instead. A clamshell design with a hinge in the back, the ADM-3A’s lines followed the shape of the CRT, swooping down to the base where the mainboard was installed. The curves were echoed almost everywhere, on the front, around the CRT and on the base. In fact, the only real appearance of straight lines was at the front where the keyboard was.

Lear Siegler could also produce the ADM-3A in different colours, which was a simple process of changing the plastics used in the moulding. But hang on... curves, different colours... doesn’t that sound a bit like the original Apple iMac G3? There are certainly some interesting parallels there.

The price of the ADM-3A steadily dropped, hitting just $595 in 1981 (equivalent to about $2000 today), shipping 150,000 by that point. Those were huge numbers of the time, and ADM-3As could be found hooked up to mainframes, Unix systems and even rudimentary home computers. Helping to introduce computing to the masses? That does sound a bit like another California corporation, doesn’t it? 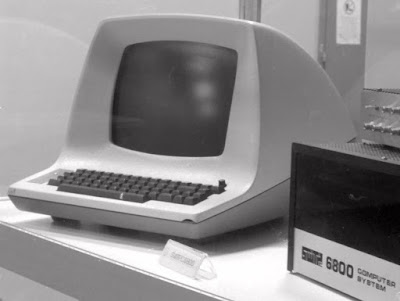 Now, you might be wondering about the “Lear” name in the company. Lear Siegler was founded by the merger of two companies, one of which was Lear Avionics founded by William “Bill” Lear*. Lear later went on to build executive jets that still bear the “LearJet” name today, although he sold his interest in Lear Siegler in 1962. LSI still exists today, although simply called the Lear Corporation, and it employees 136,000 people… which is more than Apple does.

But there’s another parallel between Lear Siegler and Apple – the ADM-3A was launched at the same time as the original Apple I, Apple’s first commercial product. Coincidentally, the Zilog Z80 microprocessor was also announced in July 1976. All-in-all, it was a pretty good month for landmark technologies.

You can still buy a used ADM-3A today, although most of the available ones seem to be in the US with prices at typically $400 to $500. And in case you don’t know what you would do with one, one particular mad genius interfaced one with a Raspberry Pi. Oh yes... as for cult there was a Usenet newsgroup called alt.religion.adm3a in the 80s and 90s, presumably created for followers of the One True Terminal.

* Lear invented the first car radio for Motorola, created the 8-track tape and pioneered business jets plus a whole lot of other stuff. He was a very clever guy. Eventually the LearJet corporation ended up as part of the giant Bombardier group, but the Lear name still lives on in the Lear Corporation which has a history of the company here.

The Motorola FONE can make phone calls, it can just about send text messages.. and really that's about it. That was pretty basic even a decade ago, so what was it about the FONE that makes it a landmark device?

Launched ten years ago this month, the Motorola FONE F3 (also known as the MOTOFONE F3) was the first mass-market consumer device to feature an E-Ink display. These days this type of display is very commonly found in eBook readers such as the Amazon Kindle, but the FONE beat the Kindle to market by a year.

The display had very low power requirements and could always be "on", unlike a conventional LCD display. And because an E-Ink screen works better in full sunlight, it was easily more usable outdoors than indoors. The display was also fairly cheap to manufacture (although development costs must have been phenomenal), meaning that the FONE was just about the cheapest handset you could buy.

However, the screen itself was very primitive. Unlike a Kindle that can display anything, the FONE was limited to a set of six 14 segment characters on one line to display a loose approximation of letters and numbers, plus six 8 segment characters on another line for numbers. There were a set of predefined icons which could be either on or off. Despite the lack of sophistication, this arrangement did work pretty well.

There were two versions of the FONE, an F3C for US CDMA networks and the plain F3 for the rest of the world. The FONE stayed on sale for a number of years, and is still available today for about £20 or €25 in good condition, which is pretty much what they cost new ten years ago.

As for electronic ink displays.. well, they didn't really take off on phones (apart from the esoteric Yotaphone range), but instead they are very common in eBook readers, fitness bands and as charge indicators in battery-powered devices. In particular the lack of colour and incredibly slow refresh rates limit their usefulness. So in the end, E-Ink wasn't really the breakthrough that it could have been, but it still fills a very important technological niche.
at 23:07 No comments: