The history of Palm is a long and complex one, starting in the early 1990s and then going through a series of splits and mergers over the years, cumulating in HP’s takeover of the company in 2010. Palm fans hoped that HP’s resources would save the struggling company and its innovative webOS operating system, and hopes were buoyed by a launch of three related products in February 2011.

These three devices had dropped the “Palm” name, but they were still true to their roots. The HP TouchPad tablet, plus the HP Pre 3 and compact HP Veer smartphones added a significant layer of polish to preview webOS devices, and fans were encouraged by these new developments, especially the TouchPad.


The TouchPad had a 9.7” 768 x 1028 pixel display,  a dual-core 1.2GHz processor with 1GB of RAM and 16 or 32GB of storage. There was single front-facing 1.3 megapixel camera for video calling. Initially it was a WiFi-only device with a 4G version promised.

The Pre 3 had a 3.6” 480 x 800 pixel touchscreen and a slide-out QWERTY keyboard, plus a 5 megapixel primary camera, 0.3 megapixel secondary one plus 8GB of storage and 512MB of RAM. The last of the trio was the Veer, which was pretty similar to the Pres 3 but with a 2.6” 320 x 400 pixel screen instead and a somewhat lesser feature set.

The Veer hit US retailers in May, the TouchPad hit the stores in July at a rather pricey $600 for the 32GB version and the Pre 3 was launched in the UK on 17th August 2011. But what happened next shocked both fans and observers alike.

It was always likely that the TouchPad would not sell as well as the iPad 2, but in fact sales were disastrous with only a few thousand units shipping in the first month. HP’s response was brutal. The day after the Pre 3 was launched in the UK, HP announced the cancellation of the entire line of webOS devices... forever. At this point, the TouchPad had been on the market for just 49 days and the Pre 3 had never even made it to the US.


HP immediately announced a fire sale of HP devices, slashing around 80% from the retail price. The result was that stock sold out almost immediately everywhere, any many retailers found their websites falling over under the sheet weight of traffic.

A strange situation developed – the TouchPad had become hugely popular device and to give HP credit, they supported it very well for several years. A decent range of applications were available and many people who were just looking for a cheap tablet found themselves very impressed by the elegant design of the webOS environment.

It didn’t take long for enthusiasts such as the crowd at Cyanogenmod to look at ways of porting Android to the TouchPad and it’s very high-quality hardware platform. As support for webOS began to wane, the only viable option was the sometimes complex process of installing a new operating system. But even today, these tablets are still viable devices if installed with a recent version of Android.

It was a dramatic end for Palm, and it was also a disaster for HP who had to write off the billion-dollar acquisition of Palm plus a loss of hundreds of dollars on each tablet and smartphone sold off at rock-bottom prices.

However, the story does quite end there. HP wondered what it could do with webOS, and after a great deal of deliberation they eventually sold it to LG where it ended up as an operating system in Smart TVs and other appliances. The Palm brand itself was bought by TCL (who make Alcatel-branded phones) who are looking at reviving it for a range of Android smartphones.*

So perhaps, it is just possible that the HP fiasco of half a decade ago isn’t the last time you might come across a Palm product..

* Just for another weird twist.. TCL use the Alcatel brand under licence from Alcatel-Lucent who dropped out of making phones, and that company recently came under the control of Nokia, another company that no longer makes phones. 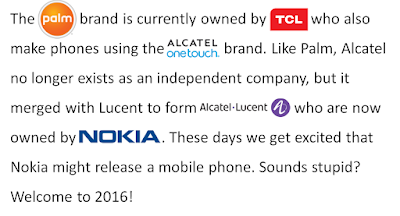 It's a fact of modern life that people like to play games on their smartphones, so it would seem like a fair bet that if a company made a smartphone designed for gamers then it might be a success.. especially if that manufacturer is affiliated to one of the giant names in gaming.

Launched five years ago this month in an attempt to capitalise on this market, the Sony Ericsson Xperia Play looked like a sure fire thing. Yes, it was a normal Android smartphone, but hidden under a sliding mechanism was a set of PlayStation-style controls and a secondary touchpad. Sony were busy porting games to the platform, and other manufacturers were free to write games that could use the secondary controls. And of course, it would do everything that every other Android phone would do too.

Sony had done something similar with the PSP Go gaming platform, so using some of the technology on a device like this should have been a winner. Except it wasn't.

The Xperia Play had several problems.. not big ones, but overall they added up to something that lacked desirability. For example, the single-core CPU was slow, the screen was adequate but not great, the camera wasn't as good as it could be, battery life was disappointing and the whole thing was bulky.

Sales were slow, and it was beginning to become apparent that Sony Ericsson didn't exactly love the device. A promised upgrade to Android 4.0 was canned, and the Xperia Play headed for the bargain bucket.

The Xperia Play remains the only dedicated gaming smartphone from a mainstream manufacturer. But it wasn't the end of the story, because a small but dedicated group of enthusiasts have continued to unofficially support the device with custom ROMs and ports of games from other platforms. One in good condition will set you back €100 or more, so they are still in demand.

It's doubtful that Sony would ever want to repeat this experiment.. but who knows?
at 22:12 No comments: 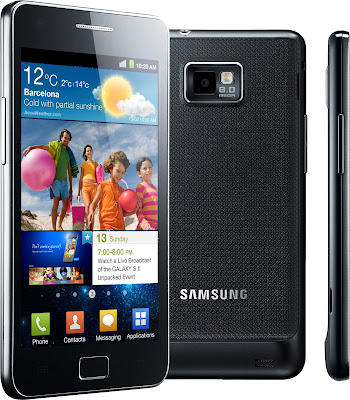 The Samsung Galaxy S II is perhaps not an iconic device, but it is probably one of the most important smartphones ever made. It may be a slabby and rather dull device to look at, but the Galaxy S II started the trend towards smartphones with ever bigger screens and more powerful features that continues today.

Samsung had been making Android handsets for two years by 2011, but to a large extent they had been lagging behind rivals HTC when it came to features. But the Galaxy S II pushed Samsung to the top of the pile with a feature set that still looks pretty good five years on.

The most striking feature of the Galaxy S II at the time was the size of the screen - a then-massive 4.3" panel with a resolution of 480 x 800 pixels. The rival iPhone 4 had a higher resolution screen, but at only 3.5" in size it was significantly smaller.

Inside was a dual-core 1.2GHz CPU with 1GB of RAM, and on the back was an 8 megapixel primary camera with a 2 megapixel one on the front...  both much better than Apple's offering. Inside was 16GB or 32GB of storage, and crucially the Samsung came with a microSD slot too. There wasn't just a single version of the Galaxy S II, instead there a couple of dozen different versions of the device including one with support for LTE 4G data.

The Samsung Galaxy S II was a massive success, and along with a growing variety of other Galaxy smartphones in pursuit it allowed Samsung to knock Apple off the number one smartphone vendor spot. But Apple were not happy with the Galaxy S II as they claimed that it copied many of the concepts included in the iPhone and this ended up in a series of lawsuits that continue even into 2016.

After the Galaxy S II, Samsung launched a new Galaxy S flagship every year with the upcoming Galaxy S 7 being just round the corner. Along with the iPhone, the Galaxy S range has been the device that every other manufacture has tried to beat. Not a bad legacy for a dull black slab, is it?