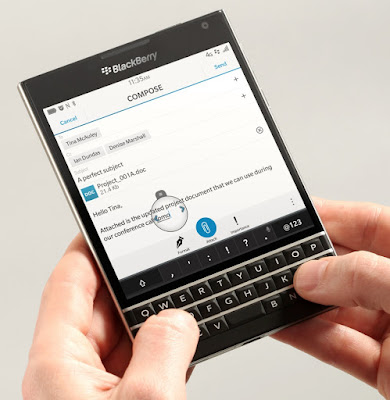 By 2014 the once-giant BlackBerry had more-or-less faded into insignificance following the disastrous launch of the Z10 and Q10 running the powerful but unpopular BlackBerry 10 operating system. A history of bad decisions by management had sidelined the company, but it turned out that they still had some fight in them.

The BlackBerry Passport is certainly one of the oddest-looking devices that we’ve seen in the past half-decade, but it was BlackBerry’s attempt to build a BlackBerry 10 device that would appeal to the corporate consumers that had stuck by it all these years. And although ultimately it wasn’t the success that BlackBerry hoped it would be, it had some novel features that set it apart from the devices we see today.

When the Z10 and Q10 were launched in January 2013 after an incredibly long time in development it soon became obvious that BlackBerry had made a huge strategic error. People who wanted an all-touch device such as the Z10 had defected to the iPhone or Android long before, but BlackBerry still prioritised the Z10 over the Q10 with its physical keyboard. And it was the Q10 that BlackBerry loyalists wanted. The upshot was that the Z10 flopped and BlackBerry ended up writing off a billion dollars to cover the fiasco.

BlackBerry ditched their top management and had a good rethink about the sort of device their customers wanted. And as a result, they came up with the rather brave BlackBerry Passport.

The Passport was like no other smartphone. Featuring a large 4.5” 1140 x 1140 pixel panel – which was square – and a three row physical keyboard on the bottom, the Passport had about the same footprint as.. well, a passport. Bigger than most other phones on the market, the solid construction also meant that it was pretty heavy too.

The unusual form factor was optimised for reading emails and documents rather than for playing games or web browsing. In this they had judged their core customer base pretty well, but the sheer bulk of the thing made it a little tricky to handle, the keyboard wasn’t like a classic BlackBerry and the whole thing felt a bit sluggish despite impressive hardware specifications.

The BlackBerry 10 operating system was much improved over earlier versions, and users could now download Android apps (albeit from Amazon and not Google) on top of BlackBerry’s class-leading enterprise software.

The Passport was well received, and sold pretty well – reportedly shipping hundreds of thousands of units in a relatively short time. But ultimately it was a bit too big, the operating system was unpopular and the device was simply too late to be the turnaround phone that BlackBerry needed.

The BlackBerry 10 OS made it into a couple of other smartphones before BlackBerry outsourced the manufacture of their smartphones and switched over to Android. Today the Passport represents an interesting part of the BlackBerry story and should be fairly collectable for those who like unusual devices. Typical prices for unlocked models seems to be between £50 to £100.