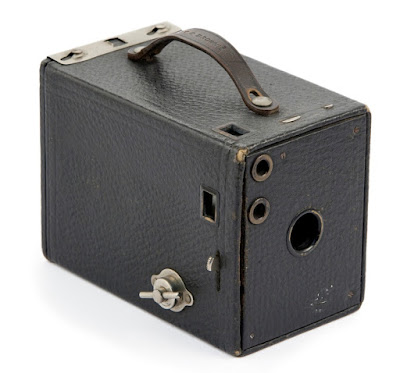 Photography these days is commonplace – we snap a photo with our smartphones and don’t give it a second thought. But early photographs were difficult, time-consuming and above all expensive to make.

By 1900 the science (or art) or photography had been around for half a century, and although it had become progressively easier and cheaper things were about to take a big leap forward with the introduction of the Kodak Brownie camera.

Priced at just one dollar at launch (about $31 today), the Brownie was a leatherette-covered cardboard box with a simple lens and a roll of film in the back. Cheap, lightweight and very easy to use the “Box Brownie” camera became a huge success. The improved Brownie 2 followed the next year (priced at $2) and this too sold in huge numbers. The real value of the Brownie to Kodak was not the camera itself, but the huge profits to be made from selling film and developing the photographs.

Box Brownies went on to document everything from family gatherings to wars. Simple to use, robust and portable – what they lacked in sophistication they made up for by being there at the right moment.  The Brownie spawned a huge range of similarly low-cost Kodak cameras over the following decades, and if you’ve ever owned a camera then you’ve probably owned a Kodak at some point.

Kodak’s business model of selling cameras cheaply and making money from the film sustained it for a hundred years, but by the end of the 20th Century digital cameras were making significant inroads into the market. Kodak tried hard to compete in this market, grabbing a decent share of the market… but it lost money on almost every camera it sold. Various other strategies were tried and largely failed, and finally the rise of high quality smartphone cameras proved a fatal blow. Kodak files for Chapter 11 bankruptcy in 2012, two years after the launch of Instagram which came up with a new paradigm for sharing photographs.

Despite its woes, Kodak still exists today although much slimmed down from the giant of the past. And Kodak Box Brownie cameras are still commonly available for not much money. Although nobody makes the film for the original Brownies any more, you can adapt current film for use in them if you are after a bit of retro photography.