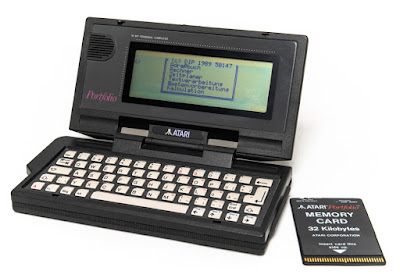 Handheld computers had been around for a couple of years by 1989, with Psion being an early pioneer. But a group of former Psion engineers wanted to put a PC in the palm of your hand, so they created the DIP Pocket PC which is mostly commonly known as the Atari Portfolio.

Weighing just 505 grams, the Portfolio had approximately the footprint of a modern 7” tablet while being a fair bit heavier. A clamshell design, the Portfolio resembled a shrunken laptop with a little QWERTY keyboard and a small 240 x 64 pixel screen that could display 8 rows of 40 characters.

It didn’t quite run MS-DOS, but something pretty close and built-in applications included a text editor, spreadsheet and various personal information management tools. New programs could be loaded in on an expansion card.

Unlike a modern tablet, the Portfolio was highly expandable, including parallel and serial adapters, a modem, an ISA expansion card bus and many others.  These impressive capabilities earned the Portfolio a role in the 1991 movie Terminator 2.

Despite being a niche product 30 years ago, the Portfolio is still pretty common to find as a second-hand buy with prices starting at less than £100 and going up to several hundred pounds depending on condition and accessories.