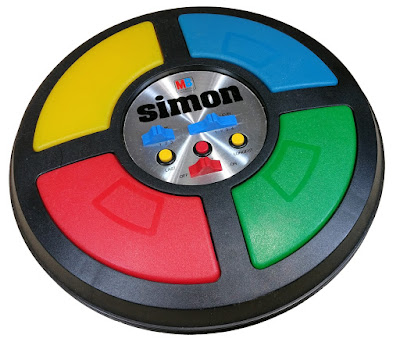 Forty years ago the microprocessor revolution was bringing affordable and usable computers into homes, businesses and schools. But at the same time we were seeing the first practical and engaging electronic toys.

Launched in late 1978, Milton Bradley’s Simon game was an electronic version of the playground game “Simon Says” - only here the Simon itself had four brightly-colour plastic buttons that lit up with an accompanying musical note, and players had to copy the ever-more-complex sequences.

The concept of the Simon was based in part on Atari’s 1974 arcade game “Touch-Me”. Where that was a coin-operated monster, the Simon itself was a handheld device and was an elegant piece of industrial design.

Inside was a customised version of the Texas Instruments TMS 1000 chip that was also the heart of the TI Speak & Spell. It was simple to use and fun to play, and massively popular. Unfortunately the bulbs used to light it up had a habit of failing and would sometimes need replacing, and then of course there was the issue of batteries...

The Simon was a significant sales success and variants of it are still on sale today, although these days under the “Hasbro” brand, or alternatively original versions are pretty commonly available and cost around the same as a new one.

Email ThisBlogThis!Share to TwitterShare to FacebookShare to Pinterest
Labels: 1978, TI