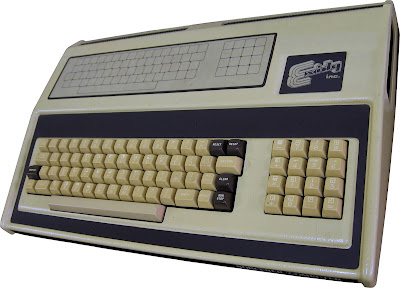 By 1978 the nascent microcomputer market was dominated by a combination of Apple, Commodore and Radio Shack. And although the Apple II, PET and TRS-80 were hugely more usable than previous generations, there was still room for improvement.

Exidy was a US-based video game manufacturer that looked at what was on the market, and decided they could do better. This led to the Exidy Sorcerer computer which was launched in April 1978 – a machine that was indeed better in many ways than the competition, but it turned out that this wasn’t enough to make it a success.

The Sorcerer was a Z80-based computer, and this meant that it could potentially run the industry standard CP/M operating system and Microsoft Basic. As well as using cassette tape, the Sorcerer could also load programs in from a cartridge (housed in an 8-track tape box) called a ROM-PAC. An optional S-100 expansion box gave the Sorcerer the ability to use industry-standard peripherals.

Out of the box, the Sorcerer was an all-on-one unit integrated into the keyboard with a composite video output, parallel and serial ports, cassette interface and expansion bus. The keyboard was a higher quality unit than most, and it came with a numeric keypad.

Exidy tried to make graphics a strong point, and the Sorcerer had a 512x240 screen resolution, but with some quirks. Firstly it was monochrome only (which was odd for a videogame company), but furthermore utilising the capabilities of the display had to be done through user-definable characters rather than the pixels being individually addressable directly. One other odd missing feature was sound, although many users managed to rig up something rudimentary using the parallel port.

The character set was a strong point – in addition to the standard ASCII characters, there were a set of characters that could be redefined by the user. This allowed a great deal of flexibility for games, and it also meant that the Sorcerer could support foreign languages.

Exidy understood the value of export markets for their video games, and they applied the same principles to the Sorcerer, shipping it worldwide. It turned out not to be a huge hit in the United States in the end, but was very popular in Australia and some parts of Europe – in part due the programmable character sets.

The Sorcerer had a relatively short life span, being produced from 1978 to 1980… except for the Netherlands where a firm called Compudata continued to build the Sorcerer under licence for years afterwards. By a twist of history, Compudata became Tulip in 1987 and it acquired the pioneering Commodore brand in 1997.

The Sorcerer is an interesting example of something that was good enough to become a major player, but didn’t quite succeed.  Today, the Exidy Sorcerer is a pretty rare find, with prices for a really good example being $1000 or more. Perhaps it won’t wow your geek friends as much as an Apple II, TRS-80 or PET… but you’ll know that you have something just a little bit more special.