LG are not known for making iconic phones. In around a decade and a half of making GSM and 3G devices, you'd be hard pushed to find anything that had enough "wow factor" to be considered a design icon. But perhaps the most memorable handset to come out of LG is the LG Chocolate, and it was ten years ago this month that LG announced the European version of the Chocolate, the LG Chocolate KG800.

Designed from the outset to be a stylish and well-built product, the KG800 was a sleek and glossy slider phone. The keypad part had a passing resemblance to a bar of chocolate, hence the name. Apart from the navigation pad, the front buttons were touch-sensitive ones that lit up when you could press them, otherwise remaining hidden.

This stylish design certainly won some fans, and it is probably one of the best-looking phones of the pre-iPhone era, and the KG800 was even presented in a little pouch which made a good first impression.

But the KG800 had problems, and those neat touch-sensitive buttons were probably the biggest. They were notoriously sensitive and easy to press by accident, meaning the KG800 owners would occasionally randomly call people.. or an even worse problem was an easy-to-access key sequence that would delete all the contacts from the phone. 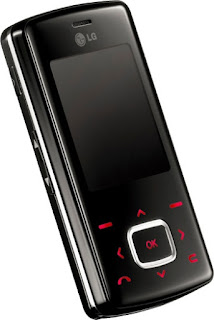 The rest of the handset was a bit disappointing. The 2.0" 176 x 220 pixel display was not all that big, even in 2006. There was only 128MB of internal memory which wasn't expandable, so although you could play MP3s on the KG800 then you couldn't store much on it. The camera was only a 1.3 megapixel unit, and the KG800 didn't support 3G or any other type of high-speed data. But at just 83 grams, the KG800 was even lighter than the rival Motorola RAZR V3i.

The Chocolate certainly showed that mobile phones could be sexy, but ultimately devices like this were soon to become a dead end with the smartphone revolution thundering over the horizon. But at the time it was a big deal. The LG KU800 added 3G and the KE800 added some features later in the year. In 2009, LG launched the BL20 and BL40 phones to try to revive the concept, but the market had moved on by then.

If you are a collector with a LG-shaped gap in your collection, then you can easily fix that for a modest outlay of £20 / €25 or so for an unlocked version of the KG800.