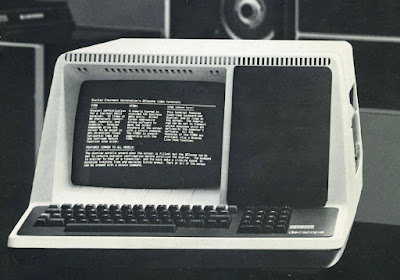 Think of the exciting end of today’s technological spectrum. You might come up with smartwatches, 4K TV and internet-connected fridges. Now think of the other end. Perhaps you might think about UPS maintenance, Sarbanes-Oxley compliance and replacing the pickup rollers in your laser printer. Well, I am going to talk about computer terminals which most people will think belongs on the less-sexy end of the scale..

..but wait. Go back forty years to September 1975. If you were a grown-up back then, you might be lusting after one of those new-fangled digital watches. But it you were very lucky, then perhaps your employer would buy you something like a Digital Equipment Corporation (DEC) VT52 instead.

If you belong to the generation that puzzles over why the icon for “save” is a floppy disk but you have never seen one, then perhaps an explanation is in order. A computer terminal is a pretty simple device that connects to a bigger computer with many users, sometimes in the same building, sometimes thousands of miles away. Back in the mid-1970s, this sort of thing was the state-of-the-art. That computer would sometimes be somewhere else in the same building, or it could be hundreds or thousands of miles away. To some extent, a terminal was just the ultimate thin client.

When the VT52 was launched in September 1975, it marked a significant transition from really incredibly dumb teletypes to devices that could run something that looked rather more like a modern business application. In other words, it helped to take computing out of the realms of the geeks and put it on people’s desks in the office instead.

OK. If you are of the iPad generation then perhaps your eyes are glazing over, but before the 1970s, the most user-friendly way you could interact with a computer was by using a teletype - basically a printer with a keyboard and a computer interface on the back. Everything you typed got printed out, and every response from the computer was printed out too. These things were connected to a box of 2500 sheets of fanfold paper which would run out from time-to-time. And they were noisy. And they were slow.

Sometime in the late 1960s, somebody had the really good idea of replacing the paper with a cathode ray tube, but although they were quieter and eliminated a lot of dead trees, they were still massively dumb devices. These were called glass teletypes, and essentially they worked in the same way as paper-based ones. 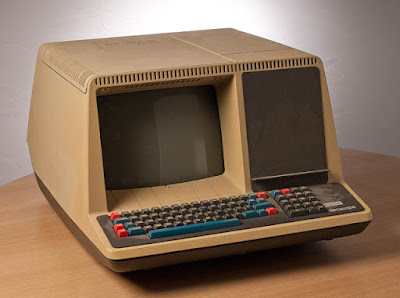 But come the 1970s, not only did we have the Bay City Rollers, but also these horribly dumb devices were becoming just a bit more intelligent, which leads us to the DEC VT52. A product of the Digital Equipment Corporation (aka “Digital” or “DEC”) of Massachusetts, the VT52 and its competitors offered some revolutionary features that would help to define modern computing.

Where a glass teletype simply printed out what it received, a terminal such as the VT52 could do a lot more. The single biggest advance was that the computer could move the cursor around the screen and output whatever it wanted, wherever it wanted. And the more basic things like being able to support both uppercase and lowercase characters at the same time certainly helped.

What this all meant was the computers suddenly became much more interactive. Instead of typing something in and just getting a response, you could create forms for entering data. Or create a spreadsheet. Or edit documents. It was the VT52 and its contemporaries that helped to build recognisably modern applications. Perhaps more importantly of all, it opened the way to quite sophisticated games such as DECWAR and Rogue.

The VT52 itself came in several different versions, including one with a printer that could dump the contents of the screen onto a wet sheet of paper. Lovely. And one key design flaw with the VT52 turned out to be the relatively flat top which ended up being covered with papers and manuals.. which lead to overheating.

Typically paired with a DEC PDP-11 minicomputer, the V52 was widely adapted by other computer systems too. In 1978 the VT52 was replaced by the DEC VT100, which became the standard terminal to emulate even today. DEC was taken over by Compaq in 1998, which itself was taken over by HP in 2002. But the direct descendant of the VT52, the VT520, is still in production today.

Within a few years microcomputers such as the Apple II and Commodore PET had moved the computer away from the control of the IT department and fully onto the user's desk, and for a long time it seemed that "thin clients" would vanish. However, the emergence of the World-Wide Web in the 1990s swung the technology the other way.

These days, 1970s DEC terminals in good condition can sell for hundreds of dollars to collectors, despite being about as useful in modern computing as a chocolate teapot.